Wular Lake in Bandipora district in Jammu and Kashmir is the largest fresh water lake in India. Jhelum River feeds this lake. The size of the lake varies according to seasons; from 30 square kilometers to 260 square kilometers (or from 12 sq. miles to 100 sq. miles). This lake was known by name “Mahapadamsar ” in ancient times.

Wular lake is designated as a “Ramsar site” as per the “Ramsar Convention” held at Ramsar (Iran) in 1971, where an international treaty for the conservation and sustainable utilization of wetlands, was signed initially by 21 counties. Currently, 168 countries are signatories to this treaty and around 2000 ‘Ramsar sites’ exists internationally, United Kingdom leads the list with 170 ‘Ramsar sites’. Bolivia has the Largest Area (140,000 square kilometers) in terms of ‘Ramsar sites’.

There was an artificial island in the middle of the lake built in the 14th century. Later on, this island has joined with the lake shores due to slitting and is a picnic spot now.

The Tulbul Project, (work was started in 1984) is a barrage (partly constructed by India) at the mouth of Wular Lake. Tulbul Project was planned to control the flow of water into the the Jhulam river to maintain the required water level, mainly for navigational purpose (boating). The project work was suspended in 1987 due to objection from Pakistan on grounds of violation of the 1960 Indus Waters Treaty.

What is the Ideal Time to Visit Wular Lake, the Largest Fresh Water Lake in India?

Wular lake is known for dangerous winds and waves! Tourism is at its peak during the months of June, July and August and these months are considered as the ideal time to visit the Wular lake.

Ladakh is the Land of High Passes, which were used for trade purposes. Zoji-La pass is the gateway of the Ladakh.

Ladakh is a land with very limited population, largely with Tibetan culture, in the high ranges of Himalayan mountains. Ladakhi population consists of Buddhists from Tibet and Muslims in almost equal proportion.

Tibetan border is on the eastern side of Ladakh. Leh is the most populous and largest town in Ladakh. Kargil and Leh and the two districts in the region. The Kargil War was fought here in this region in 1999.

Many rock carvings dating back to the ‘New Stone Age’ were found found in Ladakh. This suggests that humans inhibited Ladakh, in around 10,200 BC (or earlier).

The Siachan glacier area in the north eastern corner of Ladakh is considered as one of the highest battlefields of the world, with constant conflict between Indian and Pakistani military.

The area is diverse in flora and fauna. Many migratory birds come to this area, when other parts of India experience summer. Yaks are found in large numbers in this region. Barley, wheat, peas, etc, are the main cultivation found in this region. Vegetables are also cultivated int he region. Funnel water from the ice and snow of the Himalayas irrigate the lands! Fruits, especially Apricot is a major exporting item from this region. The area is also famous for Kashmiri woolen fabric. Famous Cashmere shawls are made from this fabric.

Ladakh is famous a Indian tourism center and is known for its adventure tourism related activities. There are many who trek from Srinagar to Leh, which may take around a fortnight.

If Non-Indian citizens wish to visit the areas of Dah-Hanu, Nubra, Pangong Lakes, Tsomoriri, Tsokar, etc. (beyond Leh), it is mandatory to approach a recognized travel agent or District collector office and get the necessary inner line permit. This rule, which was applicable to Indian citizens also, was changed on 24 April 2014 (provided you are traveling with a valid Identity document) by the J&K state government.

How Do I Go to The Land of High Passes, Ladakh?

The conventional route is the Srinagar – Lak route. There are buses between Srinagar and Leh, operated by J&K road transport corporation. These buses normally halt at Kargil for an overnight stay. Chartered luxury buses are also operated by J&K road transport corporation. Cars and Jeeps for available for hire, at Srinagar (and at Lak for return journey). Tourist operators arrange deluxe luxury buses. The distance is around 435 kilometers. This route is open from early June to November end.

Manali-Leh road is a new road which connects the hill station Manali with Leh, which is open during mid June to early October. Taklang-La pass, world’s second highest motor-able pass is in this route, at an altitude of 5,235 meters or 17,469 feet. There are many other mountain passes also in the 473 km long Manali-Leh route. Himachal Pradesh and Jammu & Kashmir road transport corporations operate ordinary and deluxe bus services in this route. The journey takes around 2 days and passengers have to take an overnight stay at Serchu or Pang.

There are a few flights to Leh from New Delhi, Srinagar and Jammu.

Gulmarg Hill Station is a popular Indian ski resorts and snowboarding resorts center in the Baramulla district of Jammu and Kashmir, India. Gulmarg is the ideal location if you are planning for your Snow holidays. It is situated near to the Line of Control between India & Pakistan. This Hill Station was the hill station of the Rajas (Kings) of India and the British in India before Indian Independence.

This hill station is at a distance of around 50 kilometers distance from Srinagar, the summer capital of Jammu & Kashmir. It is at a height of around 8880 feet above sea level. It is a famous winter sports center in Asia, famous for ski resorts. This hill station is part of the Himalayan ranges and is having the longest and highest ski slopes in Asia.

Golf Course here is the highest Golf Course in the world. The longest and highest ski resorts of Asia can be found on the slopes of Afarwat hills, of the Pir Panjal Range.

There is a two-stage rope way, the second stage takes you to around 13000 feet above sea level. Sonamarg and Pahalgam are nearby Indian tourist places.

How Do I Go to Gulmarg Hill Station?

Srinagar is the nearest town at around 50 kilometers from Gulmarg Hill station and is connected by road. The longest and highest cable car in Asia is at Gulmarg, which is an experience that needs to be experienced.

Sri Nagar airport is the nearest airport to this hill station.

Hand-Pulled Sledge, is a good option to see and travel around the city.

There are different types of accommodation available; from huts to hotels at rates affordable to one’s purse. 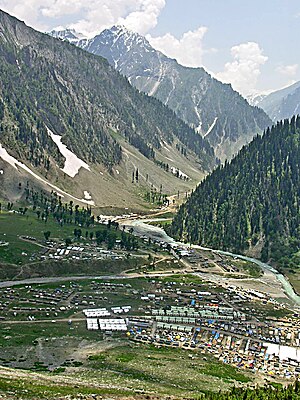 Pahalgam hill station is situated in the Anantnag district of Jammu and Kashmir, India.

Annual Amarnath Yatra pilgrimage tour to Amarnath Cave starts from Chandanwari, some 15 kilometers from Pahalgam. It is one of the most beautiful hill stations in India for its mesmerizing natural beauty. The valley offers breathtaking view of the Himalayas.

Pahalgam in Kashmir is situated on the banks of river Lidder. Pahalgam hill station is at 7000 feet above sea level. Health resort-based tourism is a major activity in Pahalgam. Trekking, water sports, horse riding, fishing, etc., are major tourism-related activities in Pahalgam.

Pahalgam is famous for woolen products.

Pahalgam is rich in flora with conifers, Saffron etc being the major plants. Many other species of rare, endangered animals are found in Pahalgam. It is home to many species of birds, including migratory birds. 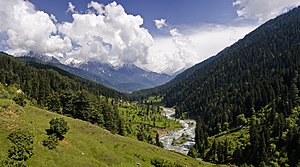 How Do I Go to Pahalgam?

Pahalgam is at a distance of 45 kilometers from Anantnag town.

Srinagar is the nearest airport at around 100 kilometers away.

Pahalgam is well connected by road to Srinagar, the summer capital of Jammu and Kashmir state.

Kashmir tour packages are available with many of the leading Kashmir tourism operators, which may be ideal for those planning to visit Pahalgam .

Is There Any Good Hotels in Pahalgam?

There are a large number of hotels in Pahalgam which suits the budget of each tourist.

Srinagar, the Paradise on Earth, is in the Kashmir Valley on the banks of the Jhelum River in Jammu and Kashmir, India.

Srinagar is one of the leading Tourist destinations in India and has much to offer to the tourists. The valley is surrounded by the Himalayas on all sides. Climate is mild cold in summer and near-zero degrees in winter months, with occasional moderate to heavy snowfall. The avalanches in winter may block the road connecting Srinagar with the rest of India.

Srinagar is believed to have a long history, dating back to the third century B.C. The city was part of the Maurya empire around 2000 years back. Buddhism was introduced to the Kashmir valley of Srinagar by none other than Gautam Buddha, the founder of Buddhism.

The Dal Lake is famous for its houseboats, and is another major tourist spot. Nagin Lake is another lake nearby.

Shalimar Bagh Gardens, considered to be the finest example of Mughal horticulture is here.  This second-century garden, rebuilt by Mughal  Emperor Jahangir in the 16th century, is the most attractive tourist spot in the city. There are many other gardens also at Srinagar.

How Do I Go to Srinagar, The Paradise on Earth?

The Paradise on Earth is well connected by roads to other parts of the country. National Highway 1A and NH 1D connect this city with the rest of India.

There is a Railway station in the city. It connects Srinagar to Baramulla. (Gulmarg in Baramulla district of Jammu & Kashmir is famous for its Skiing Resorts and Snowboarding Resorts.)

Srinagar Airport connects the valley with some of the other major airports in the country. It has an international terminal, which connects the city with the Middle Eastern city of Dubai in the United Arab Emirates.

There is a cable car facility to those interested in visiting the holy shrine of Sufi saint Makhdum Sahib on Hari Parbat.

Are There Any Good Hotels in The Paradise on Earth?

There are many good hotels in the city. Kashmir tour packages from any good Kashmir tour operator normally includes the best hotels in The Paradise on Earth.

Kashmir, the Paradise on Earth, is in the Jammu and Kashmir, India. Being on the northwestern corner of India. it shares its borders with Pakistan and Afghanistan.

Shikaras are a common feature in lakes and rivers across the valley.

Many Indian travel & tour operators have India tourism group travel packages, specially tailored for enthusiasts to Kashmir. Even though there are militancy problems in some parts of the state, tourists are spared and it is normally safe to visit the state. Tourism is the major industry here and the majority of the local population is dependent on tourists for their livelihood.

Kashmir is called the paradise on the earth as it is a beautiful area on the Himalayan ranges. There are many hill stations known for their adventure sports and winter sports.

Gulmarg has the steepest and longest ski slopes in Asia. The ropeway takes you to 13000 feet height at Gulmarg! world’s highest Golf Course can be seen here at Gulmarg. There are many a ski resorts at Gulmarg and attractive skiing packages are available. Buy some cheap snowboards and go for ski vacations. Kashmir tourism offers adventure at its best in India.

Dal Lake in Srinagar is famous for the houseboat ride in the summer season. Dal lake freezes in the winter season. There are many beautiful Mughal gardens in Srinagar which were built mainly by the Mughal  Emperors in the 16th century.

How Do I Go to The Paradise on Earth

What About Kashmir Hotels?

There are many luxury hotels, along with a large number of low budget Kashmir hotels.

We use cookies to ensure that we give you the best experience on our website. If you continue to use this site we will assume that you are happy with it.Ok